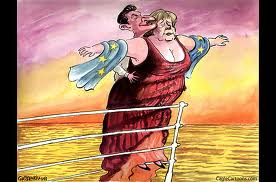 Finem respice! Principiis obsta!  Yeah, you know I must be an antiquity since I did indeed study Latin in the 8th grade in public school. But a little Latin and a love of history and the Bible does give me something of an edge when it comes to discerning the World Tomorrow. After all, as King Solomon the Wise once wrote:

What has been is what will be,

and what has been done is what will be done,

and there is nothing new under the sun.

Is there a thing of which it is said,

It has been already

Finem respice means “consider the end,” while Principiis obsta translates as “resist the beginnings.” I lifted these Latin phrases from Milton Mayer’s 1955 book They Thought They Were Free: The Germans, 1933-45, published by the University of Chicago Press.

Mayer’s book was all about how the Nazis used the human nature and cultural characteristics of the German people in order to manipulate and gradually subvert them in order to ensure their acquiescence to, and then compliance with their evil program of world war and genocide.

Most of us are somewhat familiar with a small portion of Mayer’s book in which he relates the observation of a German university professor during the 1930s and 1940s who remarked that the Nazis first targeted the Communists, then the Socialists, and next the Jews, etc., but the professor did nothing because he wasn’t one of them. Mayer wrote:

Of course, as the Nazi program unfolded, the pastor and the professor and  others like them, found themselves being isolated and then targeted. But by then it was too late as there were too few left to effectively stand and resist with them.

You see, at the beginning of the Hitler regime in 1933, the Nazis didn’t seem all that bad—a little uncouth, maybe. But after all, they had great ideas about how to rescue the economy, get people back to work, and restore some of Germany’s lost pride. So most Germans hopped aboard the Nazi Volkswagen and went along for the ride. But, of course, there was a catch, wasn’t there? There was a price to be paid in blood. Millions of Germans had their lives and families destroyed by the Second World War. One must foresee the end in order to resist, or even to perceive the mild beginnings of oppression and tyranny.

The recent Dec. 9-10th emergency Brussels meeting of the European Union marks a critical new beginning for that supra-national body. German Chancellor Angela Merkel told the press at the end of the conference “This is the breakthrough to the stability union.” 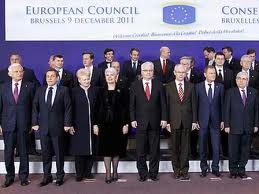 The breakthrough that 26 or the 27 European Union members agreed to was about agreeing to create a new inter-governmental treaty by which all the participating nations will have to submit their national budgets for approval by the European Commission bureaucracy, which will have the authority to veto it and order it to be revised.

The new treaty will also create an unspecified “automatic correction mechanism” that will punish any country that breaks the new European Commission fiscal rules. At least, that’s where it starts.According to the European Central Bank’s president Mario Draghi:

“It’s a very good outcome for the euro area, very good. It is going to be the basis for much more disciplined economic policy for euro-area members. And certainly is going to be helpful in the present situation.”

Well, I’m glad Mr. Draghi thinks so.  However, as of December 12th the world’s financial markets have not been as thrilled as Mr. Draghi with this outcome. But then, neither was Great Britain’s Prime Minister, David Cameron.  His was the sole dissenting voice to this newly promised Euro discipline, and he forcefully resisted this push by Germany’s Chancellor Merkel and France’s President Sarkozy. 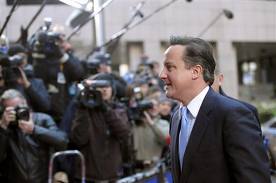 Cameron tenaciously defended his refusal to go along, saying to the press at the close of the Brussels conference on Friday:

Some of the French, though probably a minority, actually agree in principle more with the British Prime Minister than with their own president. Former French Prime Minister Dominique de Villepin, who has just announced his candidacy for the upcoming French presidential elections in April-May 2012, dismissed the Merkel-Sarkozy deal that would bind the countries that use the euro ever more closer together, including giving officials in Brussels control over national budgets, remarking:

“We’re falling in line behind interests that are not those of France. I think we need more courage than that!”

“What we are witnessing is the economic colonization of Europe by stealth by the Germans. Once, it would have taken an invading military force to topple the leadership of a European nation. Today, it can be done through sheer economic pressure.” This is, he says, the “rise of the Fourth Reich,” in which Germany is “using the financial crisis to conquer Europe.” Fiscal union, favoured by some as the long-term solution, “would make Europe effectively a German empire” and lead to “a loss of sovereignty not seen…since many were under the jackboot of the Third Reich.” http://www.newstatesman.com/print/201111240017

The motivating force behind the new German push is neither Nazism nor an overly ambitious or aggressive German lust for European domination. Rather, paradoxically, it is fear – fear of the present and fear of the past.

Any student of modern European history over the last 300-400 years knows that whenever there has been a strong continental European power seeking to assemble a coalition of European states under its hegemony, whatever the reason, the end result has always been disastrous for regional peace and freedom. Has human nature changed? Can a leopard change its spots? Are the Germans still Germans, the French still French, and the United Kingdom still British?

If you would like to learn more about what is going to happen in the future and Bible prophecy, check out my video presentation “Who Will Be King” on http://cogwebcast.com/