It would seem that some people will do just about anything to satisfy their sexual lusts. The latest horrific installment of this dark human weakness occurred in Cleveland, Ohio. Yes, the infamous case of Ariel Castro is just the latest manifestation of this fact of life, that there be indeed monsters amongst us! Having kidnapped and held captive three young women—Gina Dejesus, Amanda Berry, and Michelle Knight—Castro used them as his sex slaves for almost a decade.

As if rape, threats, chains and ropes are not enough of a nightmare, according to Michelle Knight, when her pregnancies became noticeable, Castro would starve and the beat her, hitting her womb to induce an abortion.

But it would appear that Castro was not a total monster. I suppose even Frankenstein’s monster had his softer moments. After all, Castro wanted a baby girl born to Amanda Berry to live. Michelle Knight recounted that Castro threatened to kill her if she did not successfully play the midwife to Amanda Berry as she gave birth in a plastic kiddie pool.  This child was named Jocelyn and she too escaped with her Mom from Ariel Castro’s house. The little girl now 6 years old has known nothing but the society of her captor-father and his sex slaves. I doubt that without God’s healing the psychological scares inflicted on these women will never fully be healed short of that peace that can only be bestowed by God’s Holy Spirit.

I pray that God our Father and Christ Jesus our Savior will be kind to you and will bless you with peace! Titus 1:4

The families in this poor Cleveland neighbourhood are stunned. Castro was a well-known integral part of that tight-knit Puerto Rican immigrant community. Ariel Castro is even remembered as having helping out during the search for one of his kidnapping victims and even went so far as to comfort the mother of Gina Dejesus at another occasion. Quite the act. The family of Ariel Castro, including his children and his two brothers Onil and Pedro, are also revolted at his kidnappings and rape and have publicly denounced him asserting, “We don’t have monster in our blood.” But as concerns the human race is that wholly true?

The two brothers of the Cleveland man accused of holding three women captive for about a decade say they have no sympathy for him. One called him a “monster” who he hopes “rots in jail.” http://news.nationalpost.com/2013/05/13/i-dont-care-if-they-even-feed-him/ 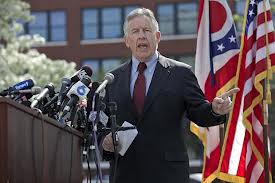 I fully intend to seek charges for each and every act of sexual violence, rape, each day of kidnapping, every felonious assault, all his attempted murders, and each act of aggravated murder he committed by terminating pregnancies that the offender perpetuated against the hostages during this decade-long ordeal.

The public has been rightly horrified by this extraordinary Cleveland monster, Ariel Castro. But don’t we tolerate our own mundane, nameless monsters who lead seemingly “normal lives” yet commit offenses equally worthy of “aggravated murder charges for terminating pregnancies.” Aren’t we, as a society, being hypocritical?

These mundane monsters, on an annual basis, terminate the pregnancies of about 100,000 unborn children in Canada and about 1,000,000 per year in the United States, albeit at the request of their own mothers! But are these “bio-waste” children any less children for being unwanted by their mothers? Just because such hard-hearted people don’t care about the innocents in utero, does that give them the right to torture and kill at will for their own convenience? Did you know that babies in utero feel pain?

This lack of a moral conscience, this ethical black hole when it comes to empathy was also the mindset of Ariel Castro, the “Cleveland Monster.” He didn’t want to be burdened by any unwanted children that came from satisfying his lust with Gina Dejesus, Amanda Berry, and Michelle Knight.

In Canada there is no law regulating abortion. A child in the womb can be legally killed up to the day he or she is actually born. Shouldn’t we as a society re-consider giving anyone the right to kill an innocent for the sake of her own personal convenience? I hope you wished your Mum a Happy Mother’s Day, yesterday! She kept you despite the inconvenience you inevitably caused her.