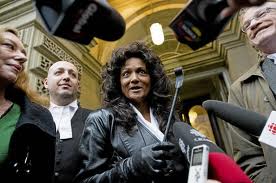 By a weird twist of irony, Canada’s 1982 Charter of Rights and Freedoms is now being interpreted by the Ontario Court of Appeal some 30 years after its immaculate conception by Pierre Trudeau as enshrining the inalienable human right of a certain sort of business people, who carry whips and dress in black leather, to run right proper bordellos that provide good security for their sex slaves—sorry, I mean “sex workers.”
As Raymond de Souza, a columnist at the National Post, wrote concerning this court decision:

In the euphemisms employed by the plaintiffs, prostitutes are “sex workers,” as if they were selling real estate or peddling cosmetics. A more accurate term is “sex slaves” — women forced to turn tricks by their drug dealers, the violent gang culture of the streets, or even abusive boyfriends.
http://fullcomment.nationalpost.com/2012/03/26/father-raymond-j-de-souza-if-prostitution-is-a-tragedy-why-make-it-easier/

Yes, of course, the court just knew how we, Canadians, have been chaffing at our previously appalling lack of legal rights to conveniently run our own little whorehouses on the prairie, as it were, in our neighbourhood strip malls! Why heck, don’t bother any more with those stuffy sex-ed classes at Billy and Meghan’s elementary school. It would be much easier to have the teachers plan a field trip to their local House of the Rising Sun for an educational show-and-tell that the kids will never forget.

I’m just so impressed with these judges’ seductive powers of legal reasoning. And, what a clever blow below the belt performed on all those moralistic Canadians who just can’t seem to get it through their heads that being a prostitute in a whorehouse is just as good a career choice as, well, being a judge in a court house. Anywise, it’s getting too hard these days to tell the judges and the whores apart anymore. After all, they both seem to be professionally working in a sort of well-paid position.

But prostitution is not like other professions. Most women cannot be said to “choose” a line of work they have been forced into, and find so disgusting, most of them need drugs to numb their misery (assuming they weren’t addicts beforehand). Those championing the rights of “sex workers” base their arguments on theory, and the word of a small minority of confident, articulate, happy or heart-of-gold hookers who know how to manipulate credulous elites. They would get a very different story from Tania Fiolleau, as I did in a recent telephone interview. Tania got into prostitution when an acrimonious custody battle over her two sons left her penniless and desperate. She eventually ran several brothels, serving as madam to 500 prostitutes. On the outside she seemed to have it all: good looks, money and power, but inside “I was the walking dead,” and “a shell of a woman.”

Tania pours scorn on the liberal image of the prostitute as a working gal like any other. Of the hundreds of girls that worked for her, she says, “not a single one ever said that she did not regret it.” She says many of her former workers are homeless or hopelessly drug addicted; some have been murdered or committed suicide.
http://fullcomment.nationalpost.com/2011/08/03/barbara-kay-prostitution-is-an-affliction-not-a-profession/

Of course, don’t blame the judges for upsetting the nation’s sexual apple cart. The judges could only work with what parliament handed them. Our politicians have refused, so far, to make the actual act of a human being prostituting herself or himself illegal. Why? Well, maybe some of our politicians would feel a little hypocritical about debating the legality of prostituting oneself.

So, our elected representatives have only passed the type of laws that regulate the business aspects of prostitution, such as running a bawdy house or living off the proceeds of prostitution, and word of mouth advertising (“communicating”). But the act of human prostitution itself has long been legal in Canada. We haven’t seemed to care if people prostitute themselves as long as they haven’t been able to run a regular business that easily and legally profits from sexual fiddle-faddle.

But now, with this judgment by the Ontario appeal court, all this changes. Now, the judges proclaim, Canada is open to fully exploit exciting business opportunities in prostitution. I wonder how long it will be before some big corporations get into the sex business, opening franchises throughout Canada. It’s probably an easy fit for the hospitality business. Talk about room service! Why Canadian prostitution pros could easily recruit a steady stream of new cheap whores from among the pool of secondary school girls, who are over the legal age to give consent for sexual intercourse (maybe 16 rather than 18 since prostitution is now a legal business), by offering to pay twice as much as competing employers like fast food joints and retail. What a great new Canadian business model. Perhaps, I need to pitch my idea to the Dragon’s Den producers!

Now, you might ask, how does this new profitable business model fit in with other Canadian cultural stakeholders like the Churches, Synagogues, or Mosques? The answer lies in the fact that Canada is officially multi-cultural. It’s been generations since we’ve thought of ourselves as a Christian nation. So if all religions are the same, why shouldn’t Canadians adopt the old Canaanite Fertility religion to go along with our new progressive take on prostitution? If we do this, then the whorehouses could do double duty and serve as house of worship as well as a business.

Prostitution was a big business in the ancient Grecian and Roman empires. But mostly the whores back then were enslaved women or boys. So the trick for the modern prostitution business model will be to get young women and men to voluntarily debase themselves for the least amount of money possible. Who knows? Maybe social media could be a useful tool?

Can you tell I’m angry!? I’m so disgusted with our making black white and white black. It is abhorrent to call prostitution a “career choice” or a “charter right.”

The Bible’s God has something to say to parents when advising their daughters about a career choice:

“Do not profane your daughter by making her a prostitute, lest the land fall into prostitution and the land become full of depravity (Leviticus 19:29 English Standard Version).

To our nation’s parliamentarians and judges the ancient prophet calls out a warning:

Woe to those who call evil good  and good evil, who put darkness for light  and light for darkness, who put bitter for sweet  and sweet for bitter!…. for they have rejected the law of the Lord of hosts, and have despised the word of the Holy One of Israel. Therefore the anger of the Lord was kindled against his people, and he stretched out his hand against them and struck them, and the mountains quaked; and their corpses were as refuse  in the midst of the streets. For all this his anger has not turned away, and his hand is stretched out still. (Isaiah 5:20, 24-25 ESV)

Woe to those who decree iniquitous decrees, and the writers who keep writing oppression… What will you do on the day of punishment, in the ruin that will come from afar?  To whom will you flee for help, and where will you leave your wealth? Nothing remains but to crouch among the prisoners  or fall among the slain. For all this his anger has not turned away, and his hand is stretched out still (Isaiah 10:1, 3-4 ESV).

Has the Bible’s LORD God changed His mind about what nourishes the human spirit and what crushes it? Do you think God has changed his mind even a little bit about prostitution? Or the personal consequences incurred by those who promote and profit from what He hates? As the Apostle Paul once wrote:

Unjust people who don’t care about God will not be joining in his kingdom. Those who use and abuse each other, use and abuse sex, use and abuse the earth and everything in it, don’t qualify as citizens in God’s kingdom (1 Corinthians 6:9 The Message).