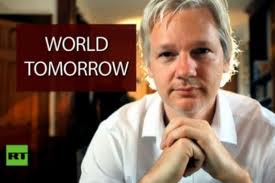 The infamous Wikileaks founder, Julian Assange, has started up on Russia’s state-funded RT (formerly Russian Times) cable broadcaster a weekly talk show program, The World Tomorrow. To many it is apparent that Assange ripped off the name of the long-running  religious program called The World Tomorrow TV broadcast.  Wow, Assange has a real load of hutzpah, but then we already knew that!

According to Wikipedia’s write up about this name:

The World Tomorrow was a radio and television half-hour program which had been sponsored by the Radio Church of God (later renamed Worldwide Church of God (WCG) while under the direction of Herbert W. Armstrong). It originally ran from 1934 to 1994.  A 15-minute version of the radio program (but under varied translations of The World Tomorrow name), was broadcast by various speakers in the French, German, Italian, Russian and Spanish languages. The World Tomorrow television program is in current production after having resumed in 2004, and airs in Atlanta, Georgia and Knoxville, Tennessee. The rights to the name were obtained by the Church of God, Worldwide Ministries of Sevierville, Tennessee, through the United States Patent and Copyright office. http://en.wikipedia.org/wiki/The_World_Tomorrow_(1934)

The trademarked The World Tomorrow TV broadcast was revived in 2004 by the World Tomorrow Evangelistic Association and is in current production and airs weekly in Denver, Atlanta, Knoxville, and Orlando.

Back in the mid-1970s I worked as a writer for The World Tomorrow program, which was then presented by Garner Ted Armstrong. When I decided to write this blog a few years ago, my sons when searching for a name urged me to pay for and secure the Internet domain name www.theworldtomorrow.ca since it was vacant. It made sense to do this, rather than let someone else like Julian Assange  who is out of synch with the name’s historic message,  squat on it.

Of course, with TV broadcasts here in North America any network worth its salt will require that an entertainment attorney do a name search for any newly commissioned series.  Julian Assange could have even done a Wikipedia search and discovered that Church of God people and organizations had long used the World Tomorrow name. 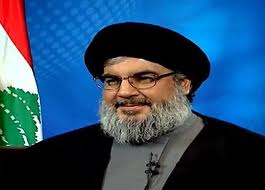 Perhaps not surprisingly,  Mr. Assange, on the first program of his new talk show  interviewed one of the world’s leading terrorists or “freedom fighters” depending on your point of view, Hezbollah chief Hassan Nasrallah.

For his last question in his talk show, The World Tomorrow, Assange asked Nasrallah this very interesting question:

You have fought against a hegemony of the United States of America, isn’t Allah, the notion of a god the ultimate superpower. And shouldn’t you as a freedom fighter seek to liberate people from the totalitarian concept of a monotheistic god?”

Actually, I’ll give Nasrallah some credit for responding with a relatively decent answer that acknowledged the Creator of the Heavens, the Earth, and humanity. Nasrallah credited  the Creator as the source of our unique moral conscience that helps us distinguish  good from evil, such as the evil murder/assassination of Lebanese Prime Minister Rafic Hariri on February 14, 2005. Not bad, really. Though Nasrallah ought to pay a bit more attention to his own preaching. Julian Assange really didn’t have too much to say in response. 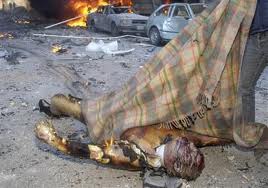 But the Apostle Paul has this to say about any who would presumptuously step on the good name, reputation, and  message so-long taught under the World Tomorrow banner:

God’s anger is shown from heaven against all the evil and wrong things people do. By their own evil lives they hide the truth. God shows his anger because some knowledge of him has been made clear to them. Yes, God has shown himself to them. There are things about him that people cannot see—his eternal power and all the things that make him God. But since the beginning of the world those things have been easy to understand by what God has made. So people have no excuse for the bad things they do. They knew God, but they did not give glory to God or thank him. Their thinking became useless. Their foolish minds were filled with darkness. Romans 1:18-21 New Century Version