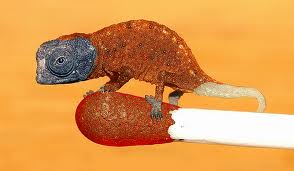 A team of German and American biologists working in Madagascar recently announced that they had discovered the world’s smallest chameleon, which they named Brookesia micra. The minature lizard grows to a maximum length of just 29 millimeters, or just over one inch.

While the phenomenon known as “island dwarfism” is well known, Brookesia micra takes this generalization to an extreme. According to the biologists announcing this discovery:

“The extreme miniaturization of these dwarf reptiles might be accompanied by numerous specializations of the body plan, and this constitutes a promising field for future research,” said herpetologist Frank Glaw, lead author of the study, in a press release. “But most urgent is to focus conservation efforts on these and other microendemic species in Madagascar which are heavily threatened by deforestation.” Cited from “Rivaling the World’s Smallest Reptiles: Discovery of Miniaturized and Microendemic New Species of Leaf Chameleons (Brookesia) from Northern Madagascar.” Frank Glaw, Jorn Kohler, Ted M. Townsend, Miguel Vences, PLoS ONE, Vol 7, Issue 2, http://dx.plos.org/10.1371/journal.pone.0031314 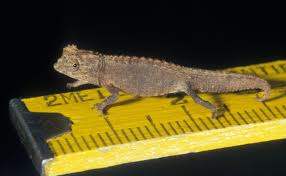 Though extremely tiny, this creature speaks big things about its Bio-Engineer. Just think about the complex miniaturization that is involved to create a living, reproducing, self-healing, self-directed fruit fly eating machine that can camouflage itself for protection by changing its skin colour automatically to match its surroundings. An absolute marvel of design. I wonder how much the brain of Brookesia micra weighs? Would it be the size of a grain of sand? Yet hard-coded into the miniscule bit of a body is its own special DNA software code that directs everything that this tiny lizard has needed to survive for thousands and thousands of years if not time out of mind when it comes to humanity. Quite an achievement, eh?

After all, it’s not a bio-engineering feat that all the scientists in the world working together could duplicate much less surpass. We humans just don’t have the brain power to match the Creator of Brookesia micra.

Of course, the human brain of itself is a remarkable piece of work. Weighing only about 1. 36 kilos or 3 pounds, it is a marvel of miniaturization that packs a remarkable wallop of computing power for its size due to some 100 billion neurons (nerve cells) and the one million billion synaptic connections linking those neurons.

We can do a wide variety of remarkable stuff with this brain. But making living things, whether miniaturized chameleons or awesomely large blue whales, is not one of them.

Perhaps a little humility before the great Creator of Brookesia micra is in order in the scientific community. Would it really be that painful to acknowledge His creative genius on university campuses? Well, it would seem so. When it comes to acknowledging the Intelligent Design of the Universe and the living things in it, many academicians prefer willful blindness.

Now the holy anger of God is disclosed from Heaven against the godlessness and evil of those men who render truth dumb and inoperative by their wickedness. It is not that they do not know the truth about God; indeed he has made it quite plain to them. For since the beginning of the world the invisible attributes of God, his eternal power and divinity, have been plainly discernible through things which he has made and which are commonly seen and known, thus leaving these men without a rag of excuse. They knew all the time that there is a God, yet they refused to acknowledge him as such, or to thank him for what he is or does. Thus they became fatuous in their argumentations, and plunged their silly minds still further into the dark.
22-23 Behind a facade of “wisdom” they became just fools, fools who would exchange the glory of the eternal God for an imitation image of a mortal man, or of creatures that run or fly or crawl (Romans 1:18-22 J.B. Phillips New Testament).

One thought on “Miniaturized marvels of design”