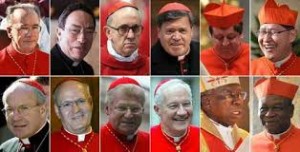 In a CBC radio interview I listened with interest to an intelligent, young, American Jesuit seminarian who prayerfully called on whoever might be the new Roman Catholic Pope “to lead us into a new age of integrity and to deliver us from hypocrisy—so that we can really be who we say we are!”

This aspiring priest believes it’s imperative for the Roman Catholic Church to really become faithful to Jesus Christ. To achieve this would require dramatic changes in order to bring that church into conformity with the way of life that the Son of God taught in both word and deed as recorded in the Scriptures.

Mission impossible? Well, that man’s not asking for much, is he? Repentance and change!  Not easy but essential to both experiencing and living authentic Christianity as described in the pages of your Bible. But repentance/change is, after all, the profession of every individual Christian and every group of people who want to be a church “of God” in reality and not merely in self-promoting advertising.

A new pope is going to have his work cut out for him if he wants to bring the Roman Catholic Church to the biblical repentance that would please Christ.  What with seemingly unending bad news arising from its on-going flood of clerical pedophile sex cases, and the Vatican Bank’s (the ironically named Institute for Religious Works) stinky reputation in banking circles as a go-to-place for money laundering by traditionally Catholic Mafioso types.

Also, one can’t neglect to add to this new pope’s to-do-list, actions to get to the bottom of the ongoing allegations of various forms of ecclesiastical corruption that include ugly bureaucratic turf battles among the Curia’s Cardinals, and—surprise, surprise—scandalous allegations that some of the papal staff formerly close to Pope Benedict XVI were embracing homosexual practices more enthusiastically than their vows of celibacy.

Wow, what a revolution of change and repentance would occur in the above situation if a new pope actually took his policy and doctrinal cue from biblical teaching about clerical marriage such as found in 1 Timothy 3:2 in order to get at the root of what’s causing that church to be rife with sexual abuse and perversion. But, don’t hold your breath. 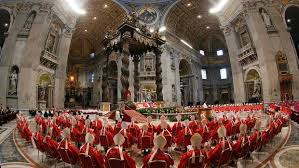 It’s hardly surprising, then, that Massimo Franco, a columnist for Italy’s leading daily newspaper, Corriere della Sera, describes the Vatican as being utterly dysfunctional in his new book “The Crisis of the Vatican Empire.” No wonder every employee working at the Vatican and all the Cardinals locked up in the Sistine Chapel to elect a new Pope are required to take vows of secrecy. What goes on at the Vatican must stay at the Vatican!

But then, what can you expect from an organization that would not even tolerate an individual’s religious freedom of conscience until the Vatican II Council in the early 1960s. Remember that the Roman Catholic Church has a long and bloody history written by its popes’ decrees. Those men who styled themselves as the successor of the Apostle Peter ordered Crusades to slaughter those they saw as “infidels” whether Muslim, Jew, or especially non-conformist Christian.

It makes you wonder when you compare Christ’s teaching to his disciples to the reality revealed by the Catholic Church’s own history.

A new commandment I give to you, that you love one another: just as I have loved you, you also are to love one another. By this all people will know that you are my disciples, if you have love for one another” John 13:34-36 English Standard Version

Following the crusades, these same popes also formulated and launched a network of terrorism 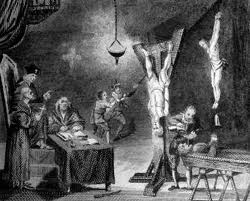 throughout the world, which persisted for almost 600 years and was known as the Inquisition. The Roman popes even authorized various forms of horrific torture by a papal bull entitled Ad Extirpanda in 1254 that would make the CIA’s use of waterboarding for interrogations look like playing tag football. Bloody, harsh, and violent were the Inquisitorial methods! The Roman Catholic Popes employed these tactics in order to enforce their monopoly on power and their domination over the expression of all individual Christians’ faith. 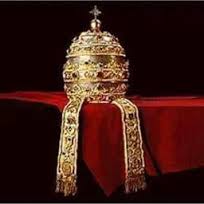 about the office itself and/or its doctrinal claim to authority over Christianity—so that it can’t be reformed, no matter the initial decent nature of the man who might occupy the so-called “seat of St. Peter”? We all know this saying about the human condition: power corrupts, and absolute power corrupts absolutely.

Check out this series of four presentations discussing the foundations of church authority. Did Christ give the Apostle Peter and his successors authority as “vicars of Christ”? Does the Pope have the authority “to bind and loose” in all matters of doctrine and tradition? Where did Sunday/Easter worship originate and why? How has Christianity changed from what was practiced by the original Jerusalem Church of God during the first 100 years after the crucifixion of Jesus? All these questions and more are discussed and examined in four in-depth streaming video presentations on this subject.