O Jerusalem, Jerusalem, how is it that after so many thousands of years you can still command the attention of a Postmodernist, unbelieving global elite in the 21st Century?  Could it be because the Biblical narrative that prophesies of something beyond the present world order scares the heck out of them?

President Donald Trump recently received an extraordinary rebuke from a curious assortment of America’s friends and foes at the U.N. Security Council—who though normally as harmonious as a bunch of feral cats and stray dogs

in an alley—discovered that they could join hands in an effort to publicly humiliate not only Trump, but also all those presumptuous Israeli Jews who dare to call Jerusalem their eternal capital city? In reply to this slam, Nikki Haley, the U.S. ambassador to the United Nations, defiantly said, “The United States will not be told by any country where we can put our embassy!”

Ouch! Evidently some Americans can be as uppity as those stubborn Israeli Jews when it comes to standing up for a worldview that’s different from their own—and this angers their adversaries. It angers them a lot. Why?

Jerusalem is a stumbling block  to this world’s governing elite. Because, it occupies the centre stage for a host of biblical prophecies and teachings  that promise to completely overthrow not only their political authority, but also their ideology of political correctness. If you would like to understand some of the ways in which Jerusalem is so important to  believing Jews and Christians, click on this link to see my video Why the Messiah and Jerusalem are Stumbling Stones http://cogwebcast.com/ 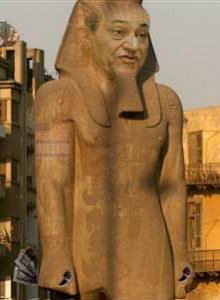 The Egyptian pharaohs always did very well for themselves as the bosses of Egypt Inc. They lived luxuriously and had everything the heart could wish for…well, almost everything. But even when their jig was up, they could afford to go in style—solid gold caskets, incredible burial pyramids—grand monuments to human nature and pride, that still draw crowds of admiring tourists.

It seems the latest incarnation of King Tut, Egypt’s now ex-President Hosni Mubarak, could also afford to be buried in a solid gold casket or maybe a decently sized pyramid if he so chose—even at today’s inflated prices. After all, news reports estimate his personal fortune and that of other Mubarak family members to be in the $10-$80 billion range. Not bad for a fellow who spent 30 years of his life as leader of his nation and another 30 years or so in the Egyptian military. Obviously the Egyptians must take great pride in providing such a remarkably generous pension scheme for their chief public servant!

Although Hosni Mubarak had feet of clay that is not to say he didn’t accomplish some good and worthwhile things during his presidency. He did keep the peace for 30 years, which is not a bad trick in the Middle East. And although Pharaoh Hosni did fabulously enrich himself during his period of power, he is not wholly unlike most Western leaders who also benefit financially from their high offices in far more ways than the official remuneration schedule would otherwise suggest. In the Western world most leaders following their term in high public office secure lucrative book deals, well-paying directorships or executive positions at major corporations, generous public speaking honorariums, sky high consulting fees, and some fascinating financial planning services from private banks, etc. But perhaps the real measure of a leader’s success should be how the poorest segment of the population fared.  Mubarak made some headway in economic development and stabilization that led to a growth in GDP but how did the poor do under his regime?

While the wider economy was doing great due to lower tariffs and taxes in Egypt during the last 6 years or so, according to David Schenker of the Washington Institute for Near East Policy, there was no trickle-down effect for your average working Egyptian. Some 20% of Egyptians continued to struggle to survive in grinding poverty. Even highly educated Egyptians found themselves working 2 or 3 jobs in an effort to sustain themselves. Why? As Schenker notes:

“Corruption is rampant. Sweetheart deals are common…. Inflation [the state stealing monetary value from wage earners and the nation’s savings] was an astounding 12.8% in 2010.“http://www.dailyfinance.com/story/hosni-mubaraks-economic-achievements/19838632/

In the Worldwide Corruption Perception Index published by Transparency International, Egypt was ranked in 2010 as the 98th most corrupt country out of 178 countries, towards the top of the second half of all nations in this world. In other words, just about average from a worldwide perspective. The world’s most corrupt nation #178 was Somalia with the runners up for second most corrupt nations tied between Myanmar and Afghanistan (surprise, surprise).  The honours for the #1 spot, or least corrupt country was a tie between Denmark, New Zealand, and Sinapore. Canada was #6, while the U.S.A. was ranked #22. http://en.wikipedia.org/wiki/Corruption_by_country. Corruption is a worldwide phenomenon.

It would seem that in the human sphere in this age when it comes to government and leadership, the great deeds and good works announced by those in power often come at a price. The cost is a corruption that oppresses and beats down hardest upon the poorest members of society.

A major focus of the Christian hope and the Gospel of the Kingdom of God is a change in governance, that will bring peace and prosperity for all – without corruption.

Why is it important that Jesus Christ will sit in the chief seat of public service in the coming Kingdom of God? The answer rests in His character. As the Apostle Paul praised Him:

17Now to the King of eternity, incorruptible and immortal, invisible, the only God, be honor and glory forever and ever (to the ages of ages). Amen (1 Timothy 1:17 Amplified Version).

Christ, the Messiah, is incorruptible. His character is faithful, true, pure, and honest.  Besides being incorruptible, Jesus Christ is also immortal. Immortality is something neither corrupt pharaohs, nor any other corrupt person can buy. Perversely, selfish human nature focuses on futilely amassing during this short lifetime a pile of money or goods. But as the country song goes, “I ain’t seen no luggage racks on the hearses going to the graveyard.” Christ is the creator, the owner, the master of the universe, so there is no covetousness or greedy desire to acquire things at the expense of those that are under his care.

“Corruption is a betrayal of a trust for personal gain.”

Escaping the clutches of this common, corrupt human nature is just one major reason why the true Gospel about the coming Kingdom of God was preached by both Jesus and the early Christian church.

The Gospel of this coming new incorruptible political reality that will govern this earth is a major focus of the Judeo-Christian Scriptures. A key prophecy for the future in the book of Daniel states:

“Sovereignty, power, and greatness of all the kingdoms under heaven will be given to the holy people of the Most High. His kingdom will last forever, and all rulers will serve and obey him,” (Daniel 7:27).

If you would like to hear more about this foundational biblical teaching on the incorruptible Kingdom of God, then check out my streaming video message on this subject, The Gospel Part 3, at: http://cogwebcast.com/