American President Barak Obama just can’t seem to deliver a TKO on the Russian President Vladimir Putin can he? In fact, for the last year it has seemed that Putin can go the distance in the ring with whatever Obama throws at him.

The unipolar world in which the United States of America is the sole superpower that can get its way in whatever it wants… is disappearing before our very eyes.

Nobody could really stand-up to the power of the U.S.A.’s displeasure in order to shelter NSA whistle-blower Edward Snowden with all his revelations of American surveillance of everyone’s 27/7 digital communications…  but Putin was willing to take Snowden in.

Obama said that the Bashar al-Assad’s regime in Syria crossed a Red Line because they used  chemical weapons in that country’s Civil War… but Putin diplomatically out manoeuvred him and Assad’s regime survived and, today, has regained the battle field initiative on the ground.

The Obama administration stage managed a coup d’état in the Ukraine in February ousting the Russian-leaning president Viktor Yanukovych in order to firmly plant the Ukraine into the Western orbit of influence… but Putin broke off Crimea from the Ukraine and regained sovereignty over the strategically import home base of Russia’s warm water fleet. Presently, Putin has inspired several pro-Russian regions of Eastern Ukraine to declare independence from the Kiev government, making a massive headache for Obama and crew. 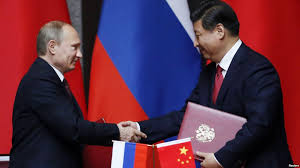 Obama and his allies try to use economic warfare tools like sanctions, travel bans, threats about boycotting Russian fossil fuel exports, and put pressure on global multi-national corporations to isolate and economically devastate Russia…  but at the beginning of this week Putin signed a colossal $400 billion, 30-year, natural gas export deal with the world’s #2 economic power—Communist China. And China deliberately went ahead and did this ignoring the pleas from the U.S. Secretary of Treasure Jacob Lew to not undermine the U.S.A.’s efforts to put an economic headlock on Russia.

And what does all this mean? According to the BBC’s analysis: “Thus this deal between Russia’s Gazprom and the China National Petroleum Corporation could symbolize an important moment of transition – when both in economic and geopolitical terms, Russia’s gaze begins to look more towards the East rather than towards the West.” 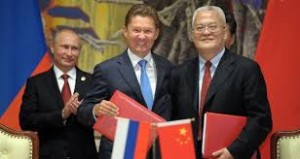 But that’s not all! Consider this comment that appeared in the state-controlled Chinese press:

“If the Chinese-Russian energy trade switches to the [Russian] rouble and [Chinese] renminbi in settling transactions, the world economy will enter a new era. It could trigger a domino effect and encourage more countries to shun the US dollar in the international energy trade… The dominance of the US dollars would decline… challenging US control over global economic and political affairs.” – Cheng Yawen in Beijing’s Youth Daily. 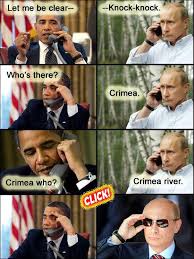 The Russian president himself towards the end of this week’s St Petersburg Economic Forum, talked about the “end of the unipolar world,” meaning the end of the U.S. pre-dominance, its hegemony over the world’s affairs.

Obama hasn’t been able to deliver a knock-out punch on the wily Russian who sidesteps, bobs and weaves away from the American’s heavy handed jabs, biding his time until he can opportunistically press an attack on a desirable soft spot in order to achieve a notable success over his more powerful opponent in world affairs.

Oh yes, the U.S. Ambassador to the United Nations tried to pass a motion at the U.N. to open up proceedings by the International Criminal Court against the Syrian regime of Bashar al-Assad on 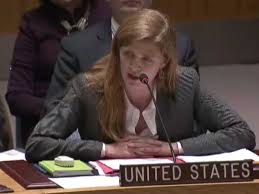 war crimes. But… Russia and China have vetoed (this week after the signing of the natural gas deal in Shanghai) a UN Security Council resolution that would have referred the conflict in Syria to the International Criminal Court (ICC).

Did you hear that great whooshing sound of the Obama administration wildly swinging, failing to connect with their adversary in world affairs?

Well, the U.S. president and his staff can at least take some consolation in the fact that this week they did get some judges to overturn voter-approved laws in those conservative, red-voting states of Idaho and Arkansas who had the audacity to ban gay marriage. Hah! That will show them the ruling Washington elite always gets its way… at least over those Americans who take the Bible seriously.

How ironic it is then, as the BBC notes “that at times Mr Putin seems to be setting Russia up as an alternative pole in terms of what he appears to regard as the decadent values of the West.” 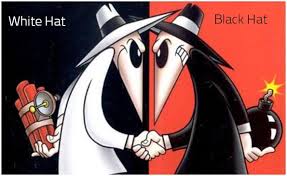 anywise? Did somebody do a switcheroo?