Wow! We’re just completing the first full week in 2016 and God help us, if this is merely a harbinger of more of the same to follow.

Let’s see, worldwide financial markets have sold off enough during this past week, due to the extreme volatility taking place in the Chinese markets, that some observers are saying we are now, officially, in a bear—that is declining—market. The Casey Research newsletter says that since Monday the world’s stock markets have lost US$2.5 trillion of their investors’ money! The newsletter quoted George Soros comment about what this first week in 2016 means:

“I would say it amounts to a crisis. When I look at the financial markets there is a serious challenge which reminds me of the crisis we had in 2008.”

Of course, it’s not just the stock markets that have been falling. Commodity prices have also been plunging for a while. According to Stephen Poloz, Canada’s central bank governor:

Since Canada is a major commodity producer its currency, the Canadian dollar, has also been under strong downward pressure on currency exchange markets, dropping from parity with the U.S.dollar in 2013 to being worth less the 0.71 U.S. cents today. This is why I’m paying $3 per pound for California broccoli when its on sale. Otherwise, it costs $5 per pound! Of course, the rising price of all food is not just due to unfavourable exchange rates.

I went to my local health food store the other day to replenish my supply of organic soft white wheat, which is great for making pancakes, dumplings, biscuits, or pie crusts. A forty-pound sack cost me CDN$69.00. Back in the 1980s I remember paying maybe $25 per sack for the same wheat. Oh yes, we know there’s inflation. But when I asked the store manager, whom I’ve know for a long time, whether $69 was a good price, or should I wait until a new supply comes in, he said that it’s not just a question of how much, but whether it’s even available in the first place. He said his wholesalers have been shorting him on what they’ll actually deliver on his orders. The wholesale suppliers are informally rationing what they’ll actually deliver to their retail store customers giving them only half of what they’ve ordered or none at all for some items. I purchased the last sack at the store that day. In short, the weather has not be favourable as it was previously and there is not the supply. Climate change?

And what about what’s going on in the Middle East? The United States under the leadership

of one of its worst presidents ever is continuing to betray its allies and appease its enemies. The Pax Americana that kept the lid on much of this world’s proclivity to violence since the Second World War is obviously breaking down. America’s enemies don’t take much of what Barak Obama says seriously, because they now know he’s just a paper tiger.

And then there’s the massive wave of 1.1 million Islamic migrants last year into Europe, especially Germany, that has unnerved a whole continent. The New Year’s Eve sexual assaults and rapes of women by “Arabic and North African-looking” men in German public places before

hundreds or even thousands of witnesses have provided some facts to fuel European anti-immigrant sentiment. According to Jürgen Falter, a political scientist at the University of Mainz.

“The fears and prejudices of people have thus been completely fulfilled, and much faster than expected. Those who have been skeptical feel themselves vindicated and those who have said ‘We can do it!’ [quoting Angela Merkel’s pro-immigrant sentiment] feel unnerved.”

And, of course, in France, Islamic terrorism keeps popping up as a North African immigrant shouting “Allah Akbar” tried to attack the guards in front of police station on the one-year anniversary of the jihadist massacres at Charlie Hebdo.

All these problems are out of the control and beyond the influence of the likes of you or me and they merely add more stress to whatever our personal circumstances have already thrown on our shoulders. What is the solution to our stress? How can you and I remain productive and positive in 2016? I’d like to quote from R.T. Brooks about the secret of how to not only cope but thrive in a time like ours.

“The New Testament is clear that a stress-free life is no part of the Christian promise. What is offered is a way of bearing stress—a way that makes the experience creative without its ceasing to be painful. Physical suffering, family tension, and social insecurity were all part of what the disciples were told to expect. But they were also told that in those experiences they would discover the power of God’s Spirit. The yoke is a natural image of stress and strain, and yet, Jesus offers his yoke [of loving God with all your heart and of loving neighbour as oneself] to the heavy laden, saying, ‘My yoke is easy, and my burden is light.’”

The solution to this world’s problems are spiritual. Be part of the solution not part of the problem. Let’s all resolve to dig into the Bible to find not only a relief from stress, but also a plan of action for a dangerous time.

Be a Stress Survivor 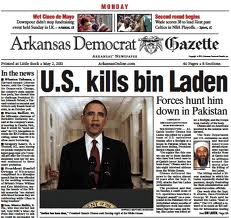 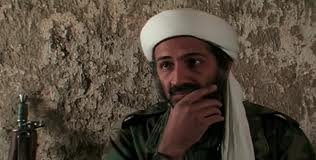 “We don’t trot this stuff out as trophies… The fact of the matter is, this was somebody who was deserving of the justice that he received, and I think Americans and people around the world are glad that he is gone. But we don’t need to spike the football” (referring to the iconic athletic enthusiasm exhibited by American footballers when they score touchdown points).

Yes, Bin Laden was indeed worthy of the death penalty as he led the terrorist organization responsible for the massacre of many thousands of innocent people. As the Judeo-Christian scriptures explicitly teach in the Law:

However, if someone deliberately kills another person, then the slayer must be dragged even from my altar and be put to death (Exodus 21:13 New Living Translation).

A few bullets to the head administered by a Navy SEAL, however, is just the beginning of the justice process for Osama Bin Laden.

In this, President Barak Obama, a self-professing Christian, seems to be ignorant. While acknowledging in the CBS interview that some people will indeed deny the certainty of Bin Laden’s execution without the release of convincing pictures, Obama asserted:

There is no doubt that Osama Bin Laden is dead. Certainly there is no doubt among al-Qaida members that he is dead…There are going to be some folks who deny it. The fact of the matter is, you will not see Bin Laden walking on the Earth again (Sheldon Alberts, Postmedia News, May 5, 2011).

Well, the real fact of the matter is, and this will be news to President Obama and perhaps many readers, Osama Bin Laden will yet again walk on the Earth! Yes, you read that correctly. There will be a “Second Coming” of this killer. And I’m not just talking metaphorically as when some other murderous Muslim fanatic commits similar crimes under the inspiration of Osama Bin Laden’s example.

How can I make such an assertion? Well, the fact of the matter is, as explained in multiple places in the Holy Scriptures, such a “Second Coming” is precisely what is going to happen to Osama Bin Laden. Notice this biblical prophecy foretelling what shall take place in the End Time:

“At that time shall arise Michael, the great prince who has charge of your people [He is one of God’s archangels]. And there shall be a time of trouble, such as never has been since there was a nation till that time. But at that time your people shall be delivered, everyone whose name shall be found written in the book. And many of those who sleep in the dust of the earth shall awake, some to everlasting life, and some to shame and everlasting contempt (Daniel 12:1-2 English Standard Version).

Even the New Covenant’s Apostle Paul asserted that bad men like Bin Laden will come to life again and walk on the Earth:

…there will be a resurrection of both the just and the unjust (Acts 25:15 ESV).

Why would God bother to bring back the bad guys? Well, God has a plan for every mortal human being including you, and me:

And as it is appointed unto men once to die, but after this the judgment (Hebrews 9:27 King James Version).

Jesus Christ himself, the Son of God, taught there is indeed coming a time of reckoning for all who have ever lived, including wicked men like Osama Bin Laden and all his al-Qaida crew of cutthroats:

Do not be surprised and wonder at this, for the time is coming when all those who are in the tombs shall hear His voice, and they shall come out–those who have practiced doing good [will come out] to the resurrection of [new] life, and those who have done evil will be raised for judgment [raised to meet their sentence] (John 5:28-29 Amplified Version).

The fact of the matter is, the real judgment day is still to come when Bin Laden will stand in the docket to fully answer for his behaviour. I’m looking forward to having a courtroom seat to witness such an event. But in the meantime I’m making it my business to be among those whom God will call righteous rather than unrighteous. How about you?