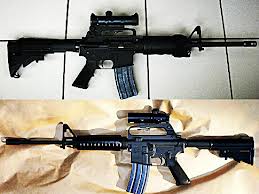 “When there are no words in any dictionary to describe what happened in Sandy Hook Elementary School in Connecticut Friday, when things happen that surely not even the cruelest imagination could comprehend [oh yeah?], it is certainly time to go back to some kind of cultural Square One and reconsider everything to which we have somehow become inured.”

Those are the words of a regular columnist who writes for our local newspaper.  He’s right! But that certainly isn’t going to be what happens, obviously.  Rather it seems American society is going to have another round in the culture wars between Democrats and Republicans over gun control. It is only politically correct to focus on the tools used in the Sandy Hook slaughter and other massacres rather than looking more deeply into why North American society is spawning these young mass murderers. The guns are not creating the mentality and willingness to do such evil. They are just the means.

If the politicians really wanted to help our society become more peaceful they might instead peel off a few layers from our dysfunctional post-modern society in order to get a little closer to our cultural Square One—to discover the truth about why things are going wrong.

For instance why not consider the omnipresent use of violence in its many forms as our “entertainment.” Media producers are practically addicted to featuring conflict and fighting, blood and gore in our movies, TV, video games and in what passes as “sports.”

Or then again, maybe our public guardian angels might find the courage to turn over a few rocks to investigate the scurrying prescription drug bugs who are pushing their wares onto truly astounding numbers of youth and adults in order to “cure” them of mental disorders like depression, hyper-activity, schizophrenia, anxiety, and much more.

These days if our witch doctors can conjure up some term to describe an undesirable mental state, then some big pharma firm will soon have a potent psycho-active drug to sell to cheaply dope up the person with the new label. This makes private and public health care providers happy because it keeps their costs down. But have you ever read the extensive list of nasty, dangerous side-effects of these drugs?  The economic-political commentator Doug Casey makes this observation about the use of these psycho-active drugs among those who have committed mass murder:

I predict that they’ll find that the 20-year-old killer, Lanza, was on Ritalin, Zoloft, Prozac, or some similar psychiatric drug. Most mass murders are proven to have been on these drugs, and the medical records are sealed for many other killers, so we can’t find out (Casey Daily Dispatch, “Doug Casey on the Fiscal Cliff,” Dec. 19, 2012, http://www.caseyresearch.com/cdd/doug-casey-fiscal-cliff).

But whether we’re talking about the pervasive presence of violence in entertainment, Prozac nation, or the American fetish for guns galore—these are just the outer layers of the onion. They are merely consequences. Side shows. Perhaps contributing causes, but not the deep down rotten root that led to the massacre at Sandy Hook.

But really, for the Western world, where do we find our cultural Square One? The real cause for what’s going wrong in our society? To find out we need to go back to the Bible. In the past a preacher might have said, “Blow off the dust on your Bible.” But, I dare say, that now many people no longer even have a copy of the Bible in their homes and even if they do, they don’t know—or care—what it says.

The Bible is a revelation. Which is to say, it contains divinely revealed knowledge that would otherwise be impossible for us to discover on our own. And this Bible begins with a book of beginnings called Genesis. This is our cultural Square One:

And the Lord God planted a garden in Eden, in the east, and there he put the man [and eventually, his wife, too] whom he had formed. And out of the ground the Lord God made to spring up every tree that is pleasant to the sight and good for food. The tree of life [symbolizing spiritually discerned revelation] was in the midst of the garden, and the tree of the knowledge of good and evil [symbolizing materially discerned understanding]. The Lord God took the man [Adam, that is to say Mr. Dust who was Adam Lanza’s namesake] and put him in the garden of Eden to work it and keep it. And the Lord God commanded the man, saying, “You may surely eat of every tree of the garden, but of the tree of the knowledge of good and evil you shall not eat, for in the day that you eat of it you shall surely die….” Genesis 2:8-9, 15-17 English Standard Version

The serpent [the Devil] was the shrewdest of all the wild animals [an insult] the Lord God had made. One day he asked the woman, “Did God really say you must not eat the fruit from any of the trees in the garden?” [Here the Devil uses a classic red herring ploy to deceive.]

“Of course we may eat fruit from the trees in the garden,” the woman replied. “It’s only the fruit from the tree in the middle of the garden that we are not allowed to eat. God said, ‘You must not eat it or even touch it; if you do, you will die.’” [This tree meant humanity was taking to itself the prerogative to determine what was “right” and what was “wrong” in their own eyes apart from God and His revelation that was then directly given to them, but which is now preserved for us in the Holy Scriptures.]

“You won’t die!” the serpent replied to the woman [Big lies are the easiest ones to swallow. A snake first covers its victim with saliva before swallowing it whole. Neither our bodies nor our souls are immortal. See Ezekiel 18 verses 4, 20, and 27. We are merely physical beings subject to eventual death, cessation of all life unless God should intervene]. “God knows that your eyes will be opened as soon as you eat it, and you will be like God, knowing both good and evil.” Genesis 3:1-5 New Living Translation

Humanity as whole ever since has built societies based on their own material understanding, determining for themselves what is right or wrong apart from God’s revelation. The only exception being that of a man called Abraham and those relatively few of Abraham’s descendants who were illuminated by the divine revelation given to them. These individuals would become known as the “children of God” who took their inspiration from their Heavenly Father to, firstly, love Him with all their hearts, souls, and minds, and, secondarily, to love their fellow human being, their “neighbours,” as themselves.

A society that forgets to put a love for the God of the Bible in first place among all their priorities will most certainly soon forget to prioritize a genuine love for their human neighbours as well.

Those who take to themselves the right to determine right from wrong in opposition to the revelation of God—they have as their “father” the Devil—the being that first tricked their ancestors into eating the fruit of the Tree of the Knowledge of Good but also of Evil. The result is our present society, which is an inseparable, delusion having aspects that are both evil and good. The Sandy Hook massacre is a prime evil result that comes from one who rejects the divine revelation about loving with all his heart the God who created him. Adam Lanza also forgot if he ever knew that he was made in the Creator’s own image and likeness with a job here on Earth: to love his little and big neighbours as himself.

Those who have eaten the wrong “fruit” just don’t and won’t get it.  They can’t get at the root of what caused the massacre at Sandy Hook and all the other mass murders going on. Jesus of Nazareth put it this way when arguing with those who insisted on rejecting divine revelation:

Why can’t you understand what I am saying? It’s because you can’t even hear me! For you are the children of your father the devil, and you love to do the evil things he does. He was a murderer from the beginning. He has always hated the truth, because there is no truth in him. When he lies, it is consistent with his character; for he is a liar and the father of lies. So when I tell the truth, you just naturally don’t believe me! John 8:43-45 New Living Translation

God gives us all free moral agency. From which Tree in the garden will you eat?

One thought on “Are you missing the lessons taught by the Sandy Hook massacre?”